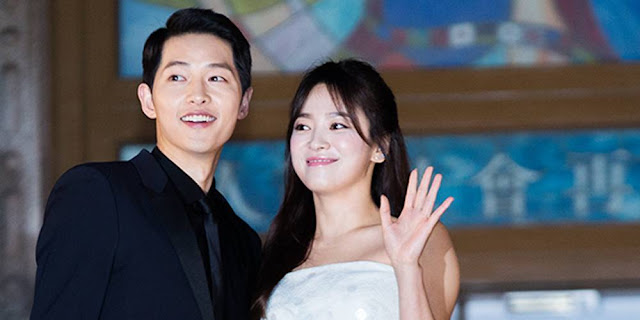 Actor Song Joong Ki and the Actress Song Hye Kyo from South Korea are reportedly getting married on October 31, 2017!!

After months of denying dating rumors, actors Song Joong Ki and Song Hye-kyo, who co-starred in the 2016 Korean dram “Descendants of the Sun,” have announced that they will be getting married on October 31st.

The news was announced through a joint statement in between of their entertainment company they belongs to yesterday.

The statement read, “Song Joong Ki and Song Hye Kyo will become a married couple and will have their wedding on the last day of October. We apologize for the sudden announcement as marriage does not only involve the two individuals, but is also a family affair, we had to be careful until everything was setteled and be sure. We hope for everyone’s blessing on this matter.”

The couple received the nick names of “Song-Song couple” while playing a roles in “Descendants of the Sun”. Song Joon ki were played as Captain Yoo Si Jin of the Korean Special Forces Unit, while Song Hye Kyo played as doctor Kang Mo yeon who is sent out to fictional country Uruk where Captain Yoo were located to aid the army. The fictional couple was adored both in and outside of Korea nd their love story coming to fruition has been the fantasy of many fans.

“Descendants of the Sun” is still broadcasting in overseas Southeast Asian countries and became really big Korean drama. and everyone loves “Song-Song couple”.

Congrats to their marriage!!! best couples ever!

0Shares
Previous Post[JW Plastic Surgery Center Korea] Dr. Chul Hwan Seul were invited to “2017 Asia Model Festival” as a judgeNext PostLet’s talk about Abdominoplasty (tummy tuck) & Mini Abdominoplasty.
We are using cookies to give you the best experience. You can find out more about which cookies we are using or switch them off in privacy settings.
AcceptPrivacy Settings