Hello
Today I would like to talk about the rest of cartilage graft I haven’t mentioned from the previous posting:
1) Shield graft
2) On-lay graft
3) Columellar strut graft

Graft can be used unilaterally or billiterally to the dorsal nasal septum. When correcting a deviated and short nose, unilateral graft enables spread of the upper lateral cartilage at the concave area, so it is effective to simultaneously correct a deviated nose. 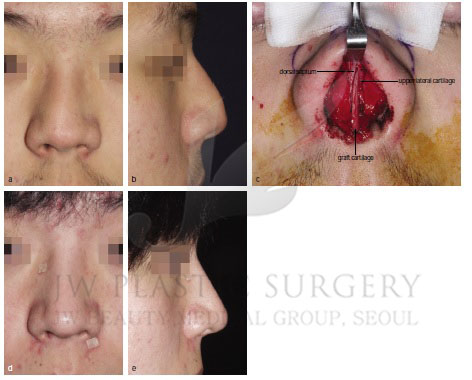 For the extended spreader type, it is advised to design the shape of the graft in a hockey stick appearance as shown in

to match the direction and position of the cartilage tip to be grafted with the dome of the alar cartilage. It is mainly used for the extension of the nasal length. Batten type is the most frequently used method as it is easy to shape and fix the graft in comparison to other types.
It is a method that directly fixes the graft at the caudal part of the nasal septum or throughout the caudal part and dorsal area while being a very effective and powerful method for tip lengthening.
In batten type, length can be extended alone or length extension as well as tip projection is possible depending on the position of the end-point of the graft. Also, it is possible to project the tip without lengthening. 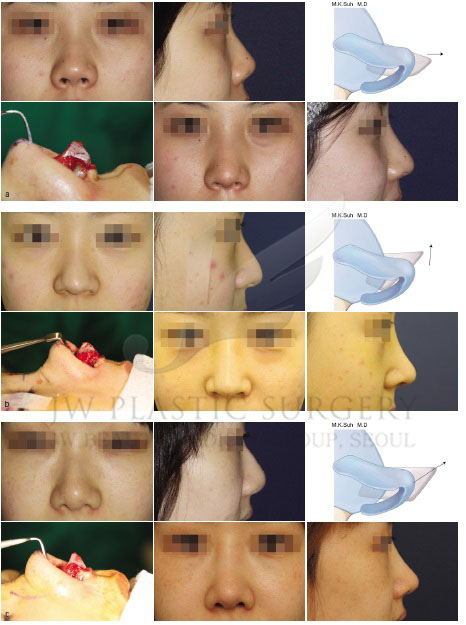 Thus, it is considered to be a very convenient and effective surgical method. When performing methods like suture technique or columella strut in case of the nasal tip plasty of Asians, many patients have very weak alar cartilage and thick skin compared to those of Caucasians. Thus, the position of the alar cartilage dome may be formed at more cephalic part than desired position or formed lower than desired height.

Septal extension graft enables the surgery as intended by the
surgeon since it allows accurate formation of the graft shape and nasal tip. For this reason, this method is favorable for rhinoplasty among Asians and it has wide range of application once this method is familiar. However, the nasal tip becomes hard with less mobility. As for the materials of septal extension graft, nasal septal cartilage is widely used but autogenous rib cartilage or homologous rib cartilage can be used as well. If the size of the harvested nasal septum cartilage is insufficient, the effect of the septal extension graft may be unsatisfactory.

Alar rim graft is a technique that can be effectively used among Asians with weak and small alar cartilages. It is a cartilage graft along the alar rim. 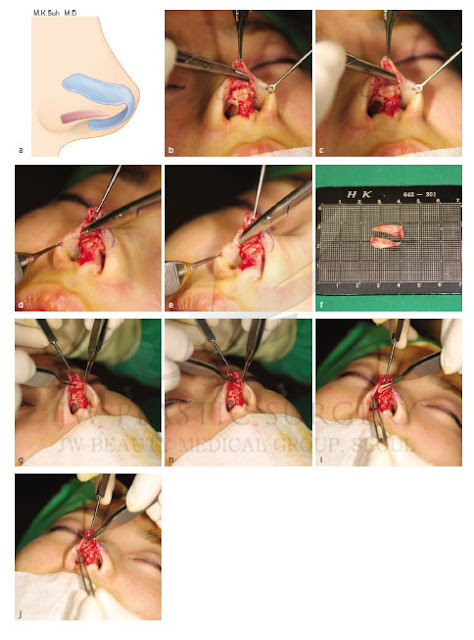 The indications of this technique are as follows. 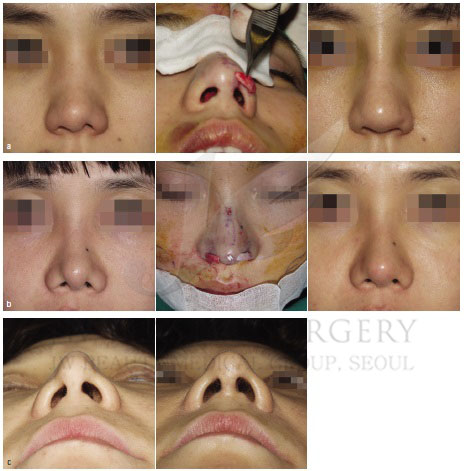 0Shares
Previous Post[JW Plastic Surgery Center Korea] The basic of nasal tip plasty. Types of Cartilage graft part 1Next PostExperience in Plastic surgery in Korea
We are using cookies to give you the best experience. You can find out more about which cookies we are using or switch them off in privacy settings.
AcceptPrivacy Settings